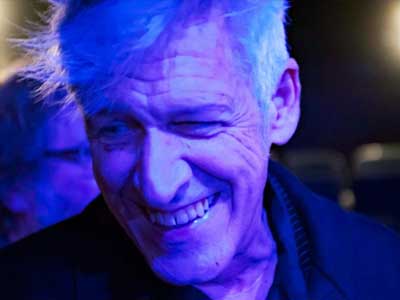 From the Lost, a 60′s garage-band that made a couple of records for Capitol, to the psychedelic late-60′s Bagatelle, to a brief stint in the post-Lou Reed Velvet Underground, the Boom Boom Band in the punk 70′s, which recorded for MCA, to an introspective take on the 80′s recording for the French label New Rose, and renewed band energy in the 90′s with the Persistence of Memory Orchestra, Willie has maintained a consistently high level of emotional and artistic integrity.

He played with the Lost, the Bagatelle and the Grass Menagerie before becoming a member of the Velvet Underground in late 1971, joining fellow Grass Menagerie alumni Doug Yule and Walter Powers and replacing Sterling Morrison, who had gone off to pursue an academic career.

With the Velvet Underground, Alexander toured England, Scotland and the Netherlands in support of then-current album Loaded. After completing the tour on November 21, 1971, in Groningen, the band planned to start recording a new album, but band manager Steve Sesnick sent all of the band but Yule home, presumably to retain maximum control of the product (the resulting album was Squeeze, released in 1973) and effectively ending Alexander's time with the band.

After leaving the Velvet Underground, he enjoyed a checkered career, both solo and with his Boom Boom Band, that lasts to this day. In-between, Alexander teamed up with Powers to tour France in 1982 for French punk record label New Rose Records, in 1987 opening for Dramarama and in 2006 for a tour with the legendary Boom Boom band.

Alexander's 1975 single "Kerouac" was covered by Tim Presley on the album The Wink (Drag City, 2016) and his 1980 single "Gin" was covered by Luna on their covers album A Sentimental Education (Double Feature, 2017).

In addition to his storied music career, in 1994, Willie narrated a local film entitled Middle Street made by fellow Gloucester native, independent filmmaker Henry Ferrini. Willie has also contributed many songs to the soundtracks for Henry's other films.

In the spirit of giving back to the community each concert is partnered with a Cape Ann non-profit organization. The public is invited to make a free-will donation (So if you can, please bring cash/check.) This week's organization is The Grace Center.

About The Grace Center

In the winter of 2009, the Cape Ann Clergy Association recognized an increasing number of requests for help from low-income and homeless adults. A Needs Assessment Study identified a number of pressing needs including the absence of a safe day space for people experiencing homelessness in Gloucester. On December 22, 2011, the Grace Center, Inc. opened as a day resource center with professional staff and volunteers. To date we have served more than 1,100 individuals. While we are proud to get to know and encourage individuals currently experiencing homelessness, we also continue to welcome the many older adults, lonely community members, or those at high risk of or currently experiencing crisis. No matter the life circumstances that have brought our guests to our doors, we strive to always provide gifts of acceptance, hospitality, and opportunity to all we meet.