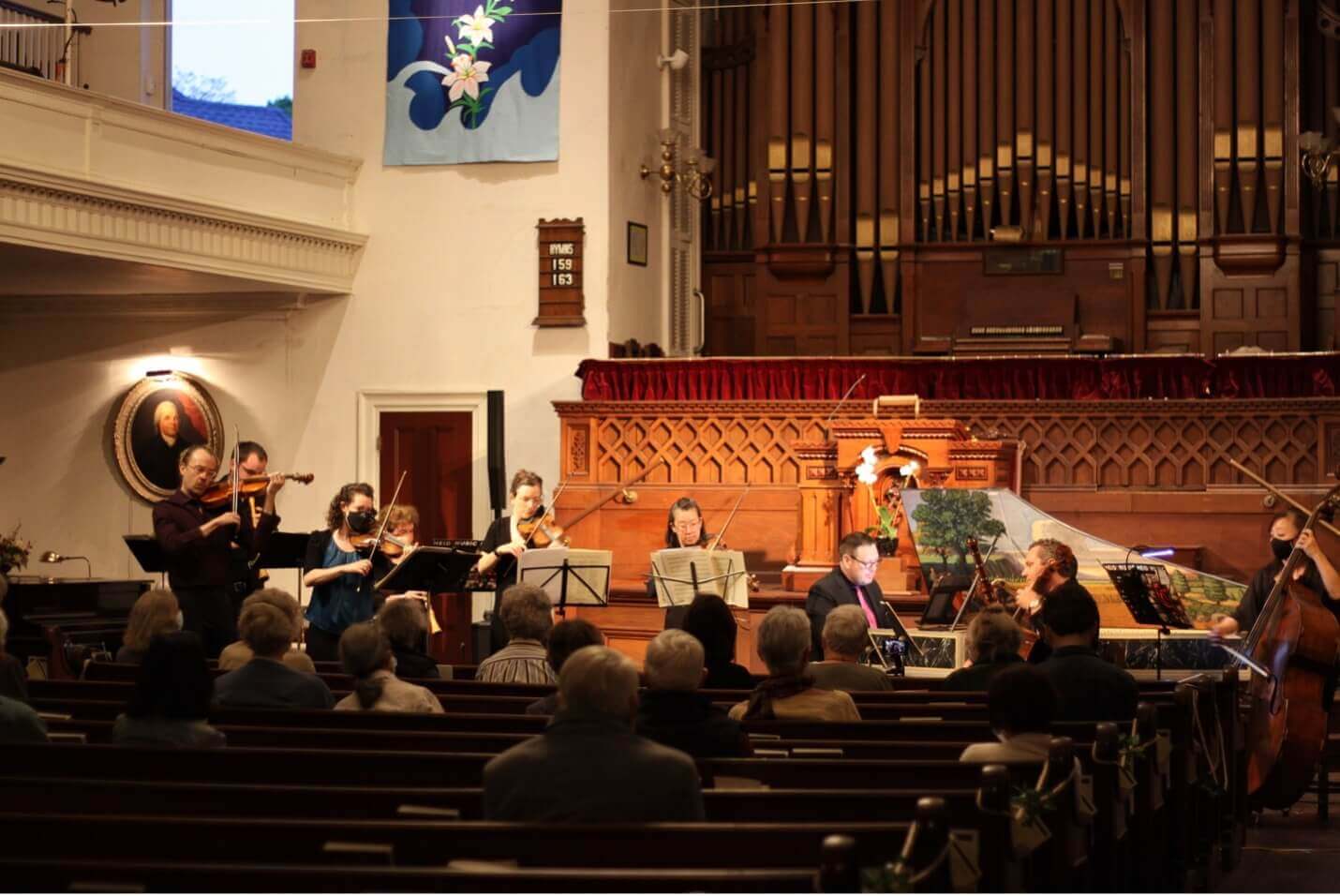 Review: Appleton Consort Premiere in the Gloucester Meetinghouse, May 21, 2022 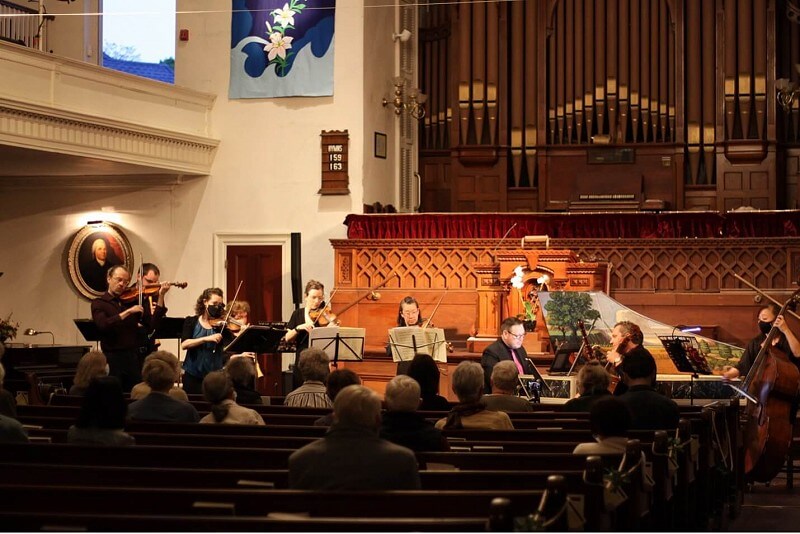 The historic 1806 Meetinghouse in Gloucester has become a superb venue for classical concerts since the creation of the Gloucester Meetinghouse Foundation in 2015, which is a non-profit dedicated to the preservation of this hidden architectural treasure at the corner of Middle and Church Streets.  Concerts since the formation of the Foundation featuring great works such as such as the Bach Mass in B-minor and Handel’s “Israel in Egypt,’ by Musica Sacra and Haydn’s ‘Mass in Time of War’ by the Spectrum Singers have set a high bar.  The premiere New England performance this past Saturday by the Appleton Consort, under the direction of cellist Mark Dupere, on period instruments more than met that level.  With obvious love for this repertoire, their authenticity, exuberance, musical prowess astonished and delighted the audience, even for those familiar with the pieces.

First on the program was the Orchestral Suite No. 3 (BWV 1068) and after very careful tuning followed by a simple nod from the conductor the ensemble took off a gallop, bringing out the rhythmic excitement of the Overture like riders on a spirited fox hunt. For those who may have been expecting a slow, loping academic performance this may have come as something of a shock. Intonation of the instruments, especially the two Baroque oboes, remained solid throughout despite Bach’s writing that leaves little space for the performers to catch a breath. The string bass, cello and harpsichord formed a perfect continuo section, underpinning the violins and viola, with the rhythmic bowing of the cello providing leadership and confidence.

The other sections of the Suite demonstrated the many tone colors of the instruments in various combinations, which were complemented by the clear and warm acoustics of the hall. Charles Nazarian, president of the Meetinghouse Foundation, referred to the construction of the Meetinghouse as a perfect concert room for music and the spoken word due to its classical proportions and materials. This was as evident in the tender, melodic passages of the Air (one of Bach’s most exquisite compositions) as in the dance-inspired sections of the Gavottes, Bouree and Gigue. Of special note was the skill of the harpsichordist, Guy Whatley from Pheonix, AZ, whose partially improvised continuo accompaniments were a constant delight and a reminder that this is living music in the hands of musicians who have the skill and imagination to play it correctly. 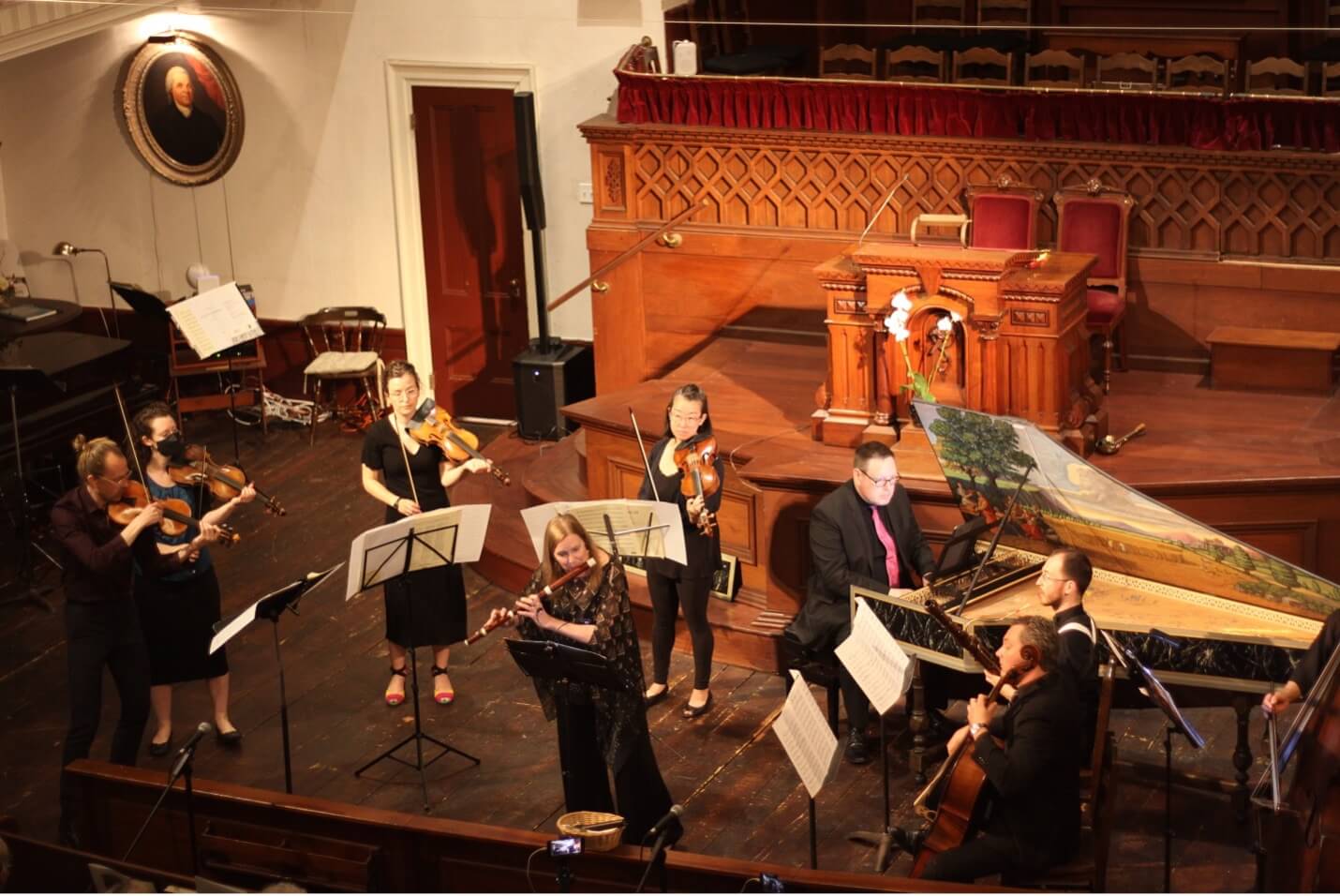 The second piece was the Sinfonia from the Cantata non sa che sia dolore (BWV 209), which depicts a farewell to a person traveling by ship on the sea. It was an apt choice for a Gloucester concert and featured the traverso flute in the capable hands of Suzanne Stumpf, who is well known to Boston audiences as co-director with Dan Ryan of the highly-regarded Musicians of the Old Post Road. Her playing is always confident, with fine articulation and a gorgeous sense of musical lines and cadences. The interplay between the strings, harpsichord and traverso was lively and at the same time sadly expressive of loss in someone going away on a sea journey. 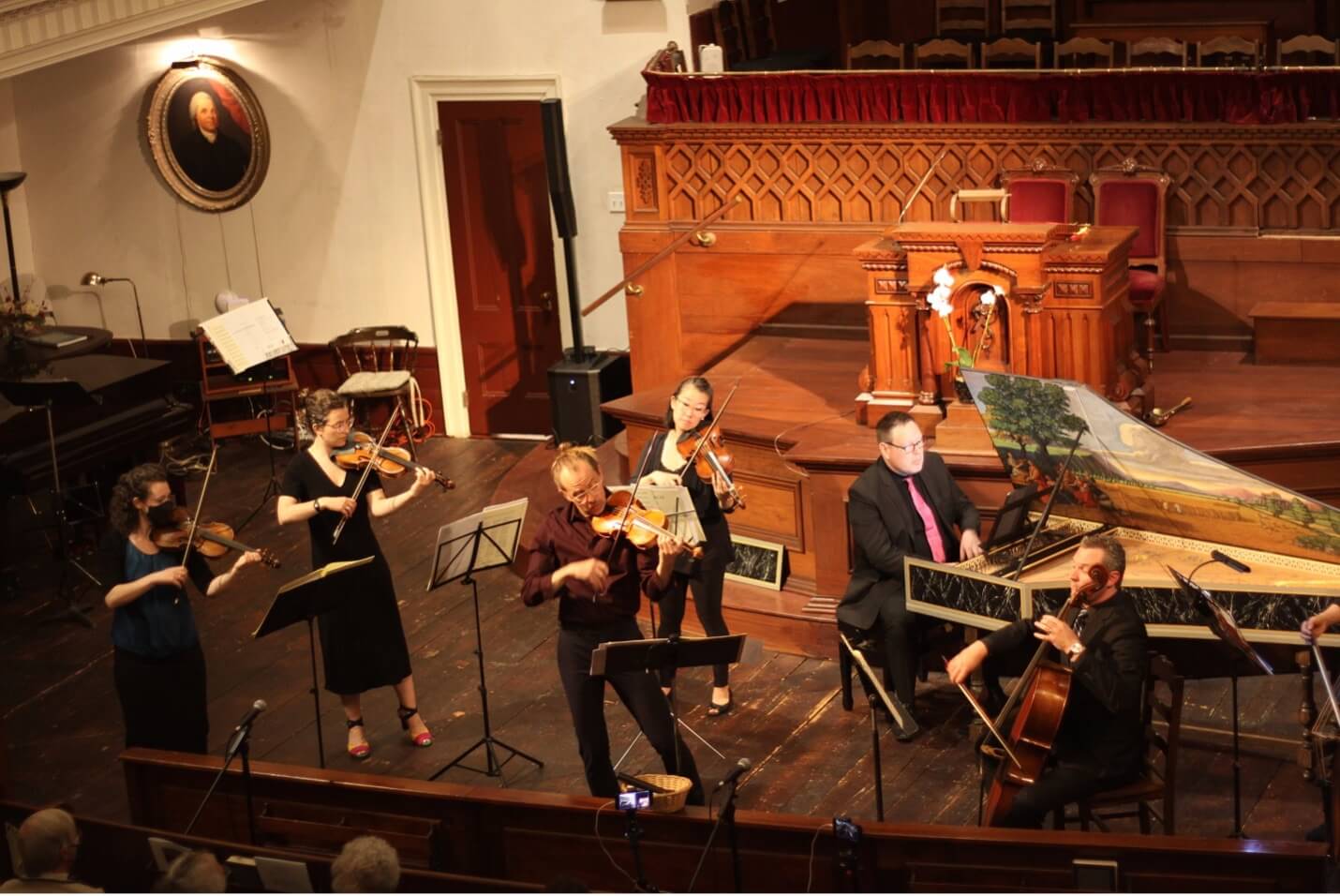 The third piece was the Violin Concerto in A minor (BWV 1041) featuring first violin and soloist Evan Few from Philadelphia, PA. This concerto, after Vivaldi, is familiar to many audiences going back to classical LP recordings by David Oistrakh. The opening Allegro requires extremely steady bowing for extended treble notes, which then drift in to descending melodic lines, contrasted with an obbligato bass and sweet echoes from the other violins. Maintaining perfect intonation is a real challenge but Evan was always on-pitch and never betrayed the technical challenges inherent in Bach’s writing. The second movement, Andante, is plaintive and gave the soloist as chance to show off the beautiful tone of this violin. The Allegro Assai provided the opportunity for full ensemble and the solo violin to enjoy a rollicking rhythm at an exciting tempo but it never felt rushed, demonstrating Bach’s reverence for Vivaldi’s writing. 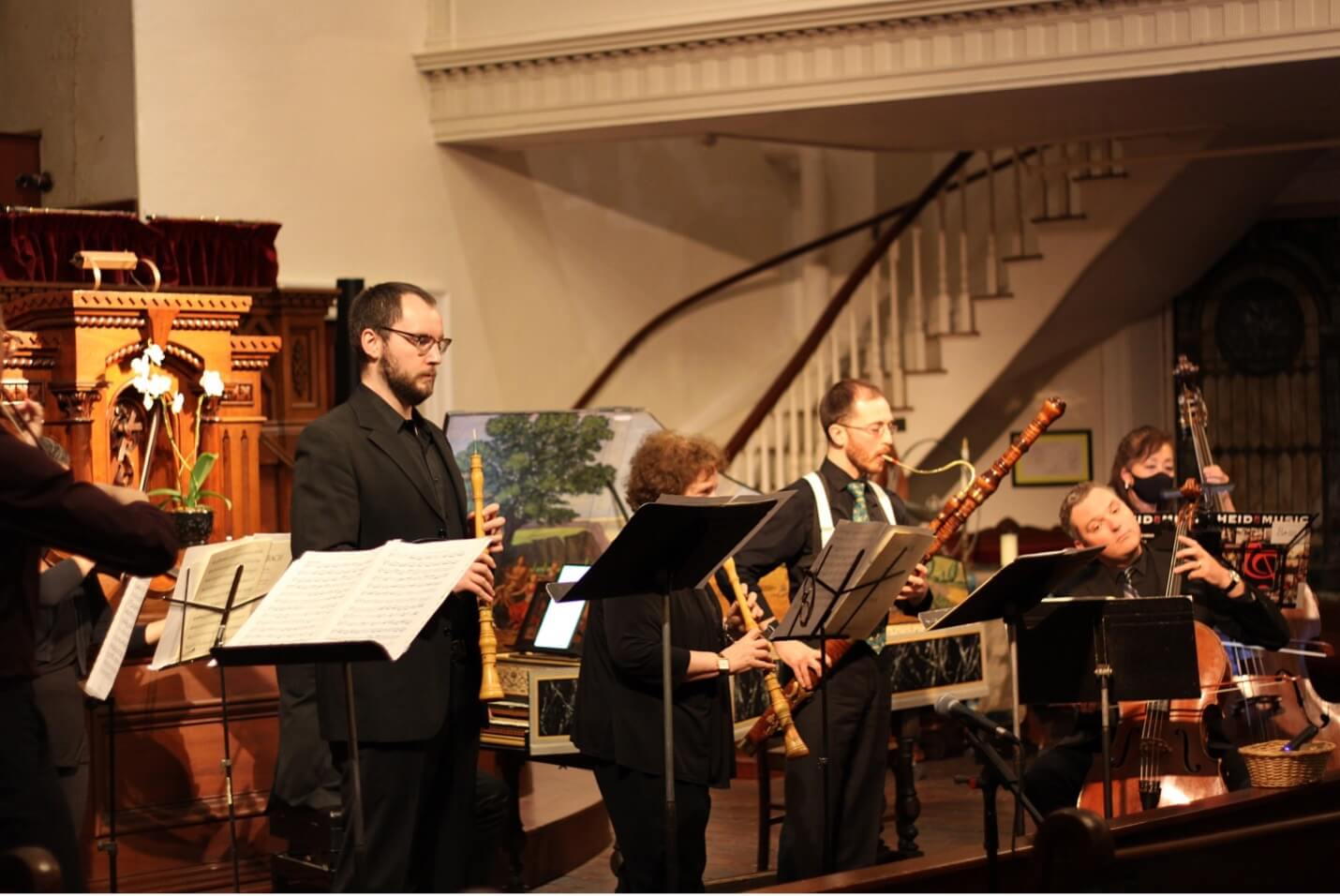 Next was another Sinfonia, this time from Cantata Am Abend aber desselbigen Sabbats (BWV 42), which features the two oboes and the bassoon in a central grouping at the front, surrounded by the continuo group. The contrast between the three woodwinds and the strings in this cheerful piece at a jaunty tempo provided a delightfully refreshing reminder of Bach’s more youthful compositions. Within the woodwind group, it is the bassoon that undertakes the primary melodic and rhythmic role, with a very challenging part perfectly performed by Allen Hamrick. Allen is well-known to New England audiences through his performances with the Early Music Festival, the Handel and Haydn Society and Boston Baroque. The two oboes play a “cat and mouse” chase with the bassoon in this piece, beautifully rendered with great musicality by Andrew Blanke and Joyce Alper.

The final piece was the well-loved Brandenburg Concerto No. 5 (BWV1050) in which a center trio is composed of the traverso, first violin and harpsichord. The flute often leads the way and the ensemble follows in an adventurous pace in the Allegro. There many opportunities for playful dialogue between the parts, sometimes led by the traverso, violin or harpsichord, with the ensemble providing a pleasing envelopment led by the cello but eventually all give way to the dramatic solo for the harpsichord in the middle of the movement. This is where the keyboard mastery of Guy Whatley shone like a morning star surrounded by a constellation of silent instruments as he built the tension in the elaborate arpeggio sections as he used his prodigious technique to build to a thrilling climax before the ensemble joined him for the closing. The Flemish double harpsichord, built by David Jacques Way in 1988, deserves special mention here for the elegance of its sounds and the stunning, Renaissance style lid painting depicting a scene from Boccaccio’s Decameron.

In the middle movement, Affetuoso, the traverso, first violin, and harpsichord tug at our emotions with a lilting, melancholy melody of great beauty but the sadness is short-lived as the full ensemble returns in the cheerful and highly rhythmic Allegro. Here again, the cello accompanied by the bass played superbly throughout by Motomi Igarashi, undergirds the whole ensemble with dynamic bowing. Modern audiences are often surprised to find that early music ensembles do not have a separate conductor but the leadership role of the conductor, who is also playing the cello, demonstrated how perfectly this works. Mark Dupere led the group with confidence, conveying tempi, dynamics or expression through his body movements and playing the cello as part of the ensemble and not as an entity separate from or above it. 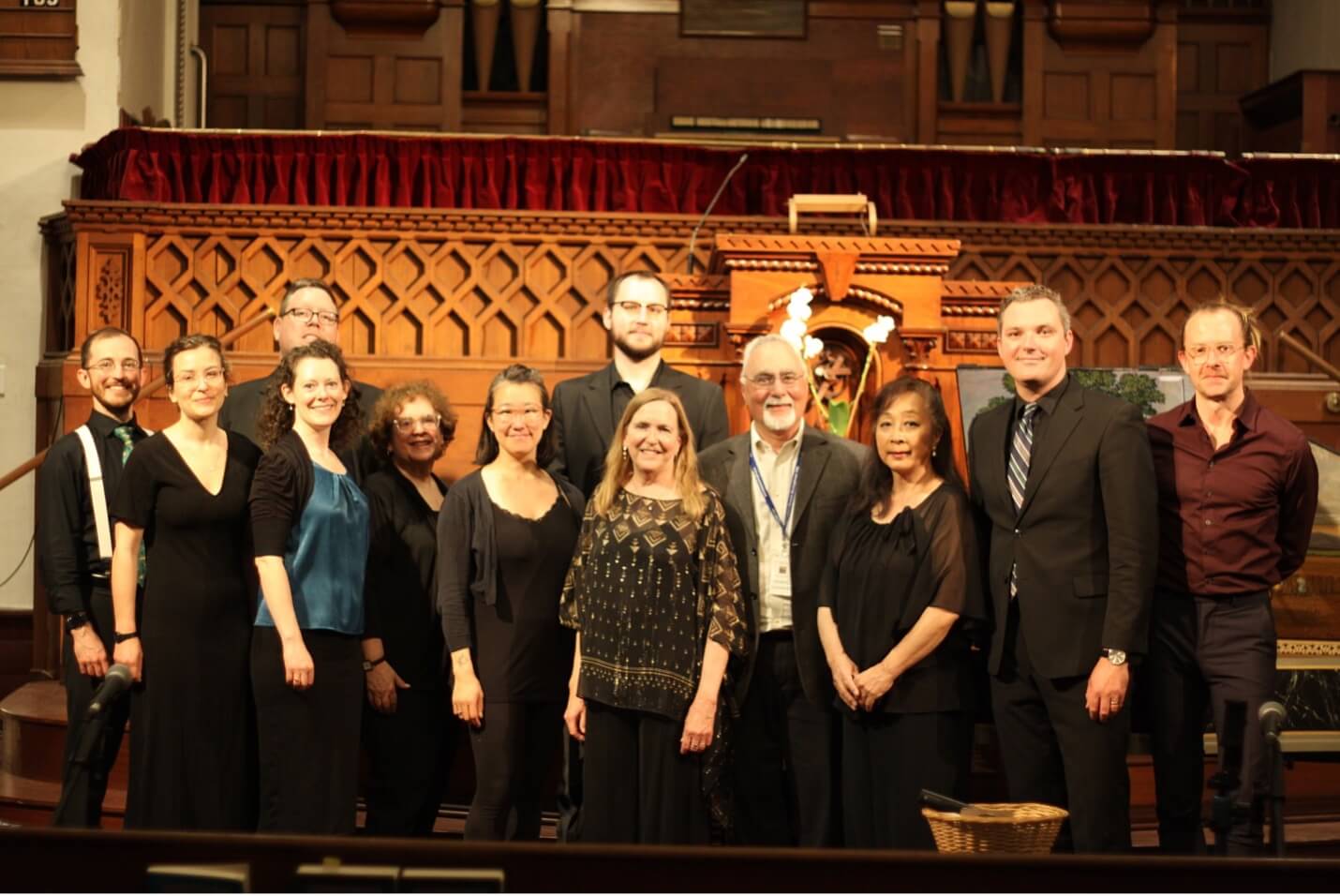 The results speak for themselves. The audience took to its feet in appreciation and if there was any disappointment it was that no encore was offered. Despite the many fine early music offerings in New England, this premiere performance by the Appleton Consort must rank in the 98.5 percentile or above. It simply was that good.

If you missed the concert it is available on the YouTube channel of the Gloucester Meetinghouse Foundation at this link: https://www.youtube.com/watch?v=4PXpfN6NB9o&t=4911s