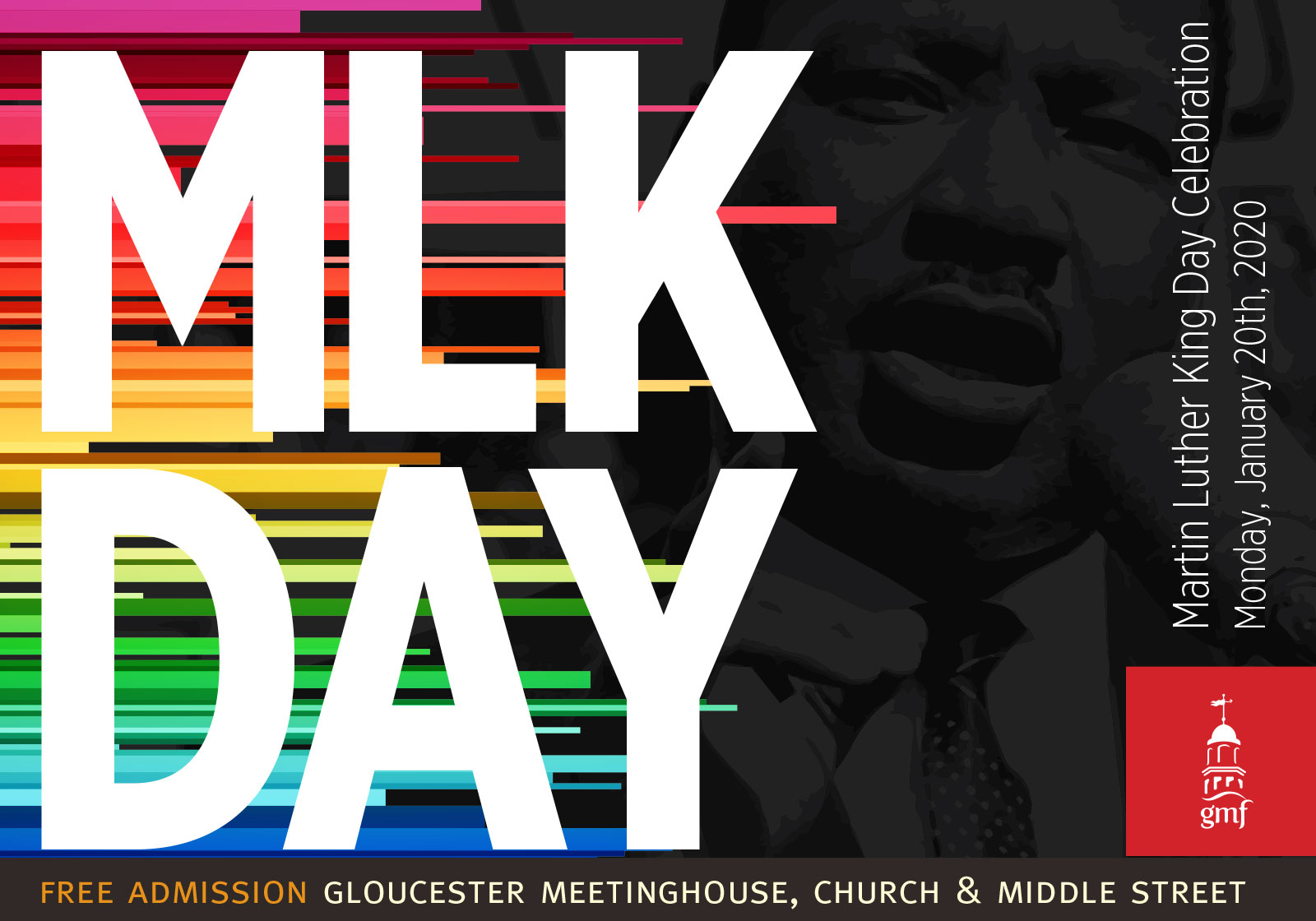 Please join us for our 4th annual celebration of Martin Luther King, Jr. Day in the historic 1806 Meetinghouse, home of the Gloucester UU Church, at the corner of Church and Middle Streets. You are welcome to attend all or part of the afternoon program, which is divided into four hourly segments separated by refreshment breaks.

The first will unveil the extensive research by the Cape Ann Slavery and Abolition Trust (CASAT), which documents the role that the industry of slavery had on Cape Ann from the 1700s until the Civil War. The second features music by the amazing vocalist Alvin Foster and his band Soul Eclectic. In the third, Byron Rushing, founding president of the Boston Museum of African-American History and a longtime state representative and civil rights leader, will deliver the keynote address. The final segment will feature a panel discussion including Rep. Rushing and members of the CASAT team with Q&A, followed by an audio recording of Martin Luther King, Jr. and a slide show. As the audience departs we will invite you into the tower to ring the Paul Revere bell for freedom. The program is free — all are welcome.

About the keynote speaker, Byron Rushing

Byron Rushing served in the Massachusetts House of Representatives from 1983 to 2018. He came to the House with a work background of community organizing and of Afro-American history.

In the legislature, Byron's priorities were human and civil rights, and the development of democracy; local human, economic and housing development; and housing and health care for all. He was the House Majority Whip. He was a leader of the Commonwealth's anti-apartheid efforts and a sponsor of the Commonwealth's twinning relationship with the Province of the Eastern Cape in South Africa. He was the chief sponsor of the Massachusetts Burma law.

He successfully sponsored legislation to create the Commission to develop a comprehensive plan to end homelessness in the Commonwealth. He sponsored the law for the over-the-counter sale of sterile needles and the law creating statewide guidelines for hospitals dealing with violence victims. He was a chief sponsor of legislation for substance abuse "treatment on demand,” He co-chaired the state's Health Disparities Council and was chief cosponsor of the law establishing a permanent disparities office in the Department of Public Health.

Byron was an original sponsor of the gay rights bill and the chief sponsor of the law to end discrimination on the basis of sexual orientation in public schools. He was one of the leaders in the constitutional convention to maintain same sex marriage in Massachusetts. He successfully co-sponsored the transgender civil rights bills. His work in these areas of civil rights is the subject of the short film, "Marriage Equality: Byron Rushing and the Fight for Fairness”.

He was a spokesman against the restoration of the death penalty in Massachusetts. He lead the ongoing effort for size acceptance and anti-discrimination on the basis of height and weight; for the repeal of archaic laws; and for the revision of the Massachusetts state seal.

From 1972 to 1985, he was President of the Museum of Afro-American History. Under his direction, the Museum of Afro-American History purchased and began the restoration of the African Meeting House, the oldest extant black church building in the United States. In 1979, Byron oversaw the lobbying effort in Congress to establish the Boston African American National Historical Site, a component of the National Park Service. Byron led the Museum in the study of the history of Roxbury; the Museum conducted the archaeological investigation of the Southwest Corridor for the MBTA. As a legislator he sponsored the creation of Roxbury Heritage State Park. Byron stays involved in this work: He leads tours of African American and working class neighborhoods in Boston and Roxbury and is working to revitalize the Roxbury Historical Society and its mission to tell the history of all the people who have lived in this geography. He is a Trustee of the Massachusetts Historical Society.

Born in New York City, Byron has lived in Boston since 1964. During the 1960's he was active in the civil rights movement--working for CORE (Congress of Racial Equality) in Syracuse, NY--and as a community organizer for the Northern Student Movement in Boston. He directed a group of organizers, Roxbury Associates, who helped to found the Lower Roxbury Community Corporation, one of the first CDCs in the nation. A conscientious objector during the Vietnam War, he perfomed his alternative sevice for two years at the Rochester (NY) General Hospital.

An active Episcopalian, Byron has been an elected lay deputy to the General Convention of The Episcopal Church since 1973; he was the chaplain to the House of Deputies at the 1994 General Convention--the first layperson to hold this position. In 2012 he was elected (and re-elected in 2015 and 2018) Vice-President of the House of Deputies—-the highest elected position held by a layperson in The Episcopal Church. He holds an honorary doctorate from the Episcopal Divinity School in Cambridge. He is a popular speaker and preacher on the ministry of all the baptized and on politics and faith. Byron is a member of St. John's, St. James Parish in Roxbury; and frequently attends St. Stephen’s in the South End.

During all his time in Boston, Byron has worked for and with community-based organizations--for greater political participation and against neighborhood debilitation. He continues his work to increase the understanding of the history of poor and working class people and people of color.

Please note that the Rockport UU Church, located at 4 Cleaves Street, will be holding their 32nd Annual MLK Day March and Interfaith Service, starting with signmaking at 9:30am.