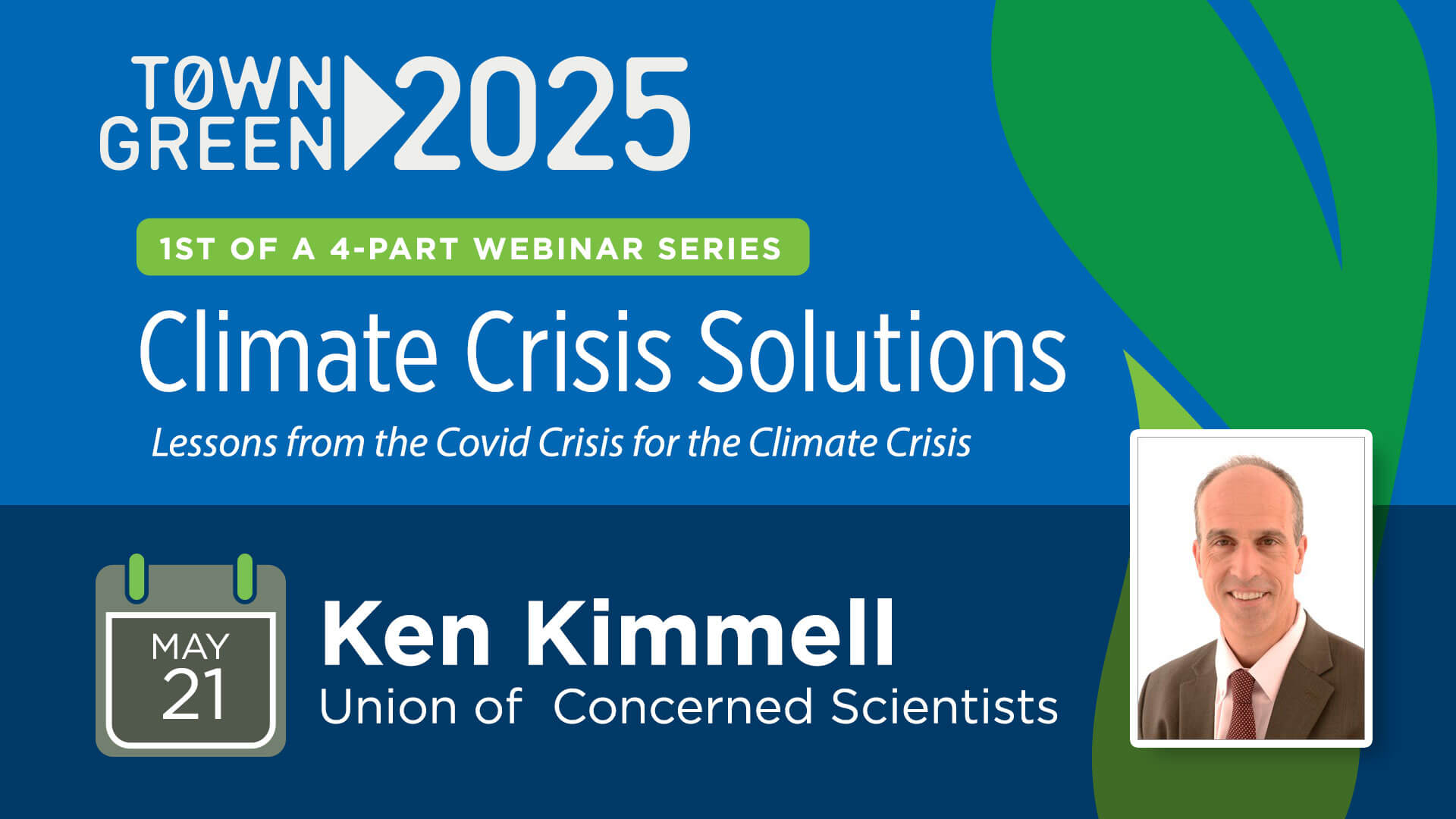 Join us for an hour-long program featuring Ken Kimmell, President of the Union of Concerned Scientists. Mr. Kimmell will speak on the theme of “Lessons from the Covid Crisis for the Climate Crisis.” The 25-minute presentation will be followed by an opportunity for questions from the Zoom audience, and a final wrap up by the moderator, Dick Prouty, and panelist, Candace Wheeler.

As we kick off our Climate Crisis Solutions webinar series, we're excited to welcome Ken Kimmell as our first guest. Ken Kimmell is president of the Union of Concerned Scientists, a leading science-based nonprofit that combines the knowledge and influence of the scientific community with the passion of concerned citizens to build a healthy planet and a safer world. Mr. Kimmell has more than 30 years of experience in government, environmental policy, and advocacy. He is a national advocate for clean energy and transportation policies and a driving force behind UCS’s “Power Ahead” campaign to build a large and diverse group of clean energy leadership states.

Mr. Kimmell served on the Commission on the Future of Transportation in the Commonwealth, which advised Massachusetts Governor Charlie Baker’s administration on future transportation needs and challenges. Kimmell was one of 18 members the governor appointed to the panel charged with looking at five areas anticipated to have a dramatic impact on transportation: climate and resiliency, transportation electrification, autonomous and connected vehicles, transit and mobility services, and land use and demographic trends.

Prior to joining UCS in May 2014, Mr. Kimmell was the Commissioner of the Massachusetts Department of Environmental Protection (MassDEP), an agency with a $100 million budget and 800 employees, including a large staff of scientists and engineers. As commissioner, he also served as chairman of the board of the Regional Greenhouse Gas Initiative, helping to prod the nine member states to reduce power plant carbon emissions by almost 50 percent through 2020, reducing emissions in the region by some 90 million tons.

Mr. Kimmell has also served as general counsel at the Executive Office of Energy and Environmental Affairs in Massachusetts Governor Deval Patrick’s administration, and spent 17 years as the director and senior attorney at a Boston-based law firm specializing in environmental, energy, and land-use issues.

Mr. Kimmell decided to focus his legal work on environmental issues after clerking for the U.S. District Court in San Francisco, where he assisted a judge in a case involving the health effects of Agent Orange. Originally from New York, he earned his bachelor’s degree at Wesleyan University and his law degree at the University of California, Los Angeles.

Mr. Kimmell has been quoted widely, including by the Associated Press, the Boston Globe, Bloomberg Business, the New York Times and the Washington Post, and has appeared numerous times on E&E TV and National Public Radio.